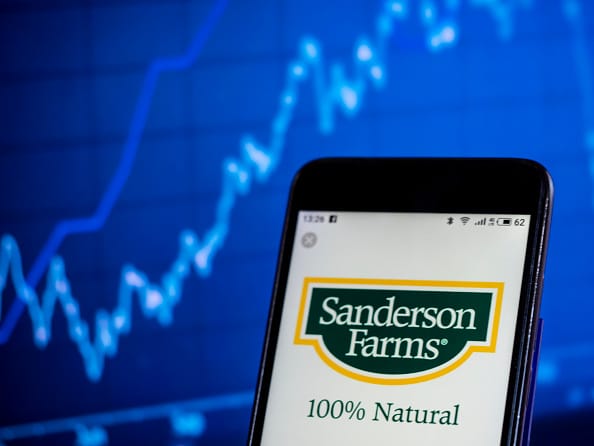 Take a look at some of the biggest movers in the premarket:

Sanderson Farms (SAFM) – The poultry producer agreed to be acquired for about $4.5 billion, or $203 per share, by privately-held food producer Cargill and agriculture investment firm Continental Grain. The all-cash deal represents an 11.3% premium over Friday’s closing price for Sanderson Farms. Sanderson shares surged 8.3% in the premarket.

Tesla (TSLA) – Tesla gained 1.6% in the premarket after Jefferies upgraded the stock to “buy” from “hold,” based on what the firm feels is more efficient capital deployment and an improved ability by auto manufacturers to increase profit margins over time.

U.S. Foods (USFD) – The foodservice distributor’s shares rallied 6.5% in the premarket after beating Street forecasts with its second-quarter profit and revenue. U.S. Foods earned 58 cents per share, 22 cents a share above estimates, helped by strong demand for its products and services as the industry recovers from the pandemic.

Tyson Foods (TSN) – The beef and poultry producer reported quarterly earnings of $2.70 per share, well above the consensus estimate of $1.62 a share. Revenue also came in above analysts’ projections. Results got a boost from strong consumer demand as well as restaurant reopenings. Tyson shares rose 2.6% in premarket trading.ovid

Berkshire Hathaway (BRK.B) – Berkshire shares rose 1.2% in premarket trading after it reported a 7% increase in second-quarter earnings. Berkshire’s results were helped by a rebound across its businesses including its railroad and energy companies.

Veoneer (VNE) – The auto parts maker said it would begin talks with Qualcomm (QCOM) about the chip maker’s takeover bid, which topped a bid from automotive software maker Magna International (MGA) that had been previously approved by Veoneer’s board. Qualcomm’s bid is worth $4.6 billion, compared to the approximately $3.8 billion value of Magna’s deal. Veoneer slid 3.3% in premarket trading.

Exact Sciences (EXAS) – The molecular diagnostics company has approached genetic testing firm Invitae (NVTA) about a possible merger, according to people familiar with the matter who spoke to Bloomberg. The people said the two sides are not in active talks and that a seal would likely be a low-premium, all-stock transaction. Invitae surged 7.2% in the premarket while Exact Sciences fell 2%.

Dollar Tree (DLTR) – The discount retailer was downgraded to “hold” from “buy” at Deutsche Bank, which expressed concerns about the impact of increased freight and labor costs on profit margins. Dollar Tree lost 1.5% in premarket action.

Exxon Mobil (XOM), Chevron (CVX) – These and other energy companies are under pressure as oil prices slide following new China virus measures as well as a U.N. report on the impact of climate change. Exxon fell 1.3% in premarket trading, while Chevron was down 1.6%.

Victoria’s Secret (VSCO) – JPMorgan Chase initiated coverage on the women’s apparel retailer with an “overweight” rating, noting its dominant market position in lingerie and nightwear and expansion opportunities in swimwear. Victoria’s Secret added 1.6% in the premarket.

NetEase (NTES) – The China-based online services company surged 2.3% in premarket trading, following a Reuters report that it has delayed a planned $1 billion Hong Kong initial public offering of its Cloud Village music streaming service. People with direct knowledge of the matter said the delay was due to volatile trading in China’s major tech companies.

TV
WATCH LIVEWATCH IN THE APP
UP NEXT | ETListen
This article was originally published by Cnbc.com. Read the original article here.