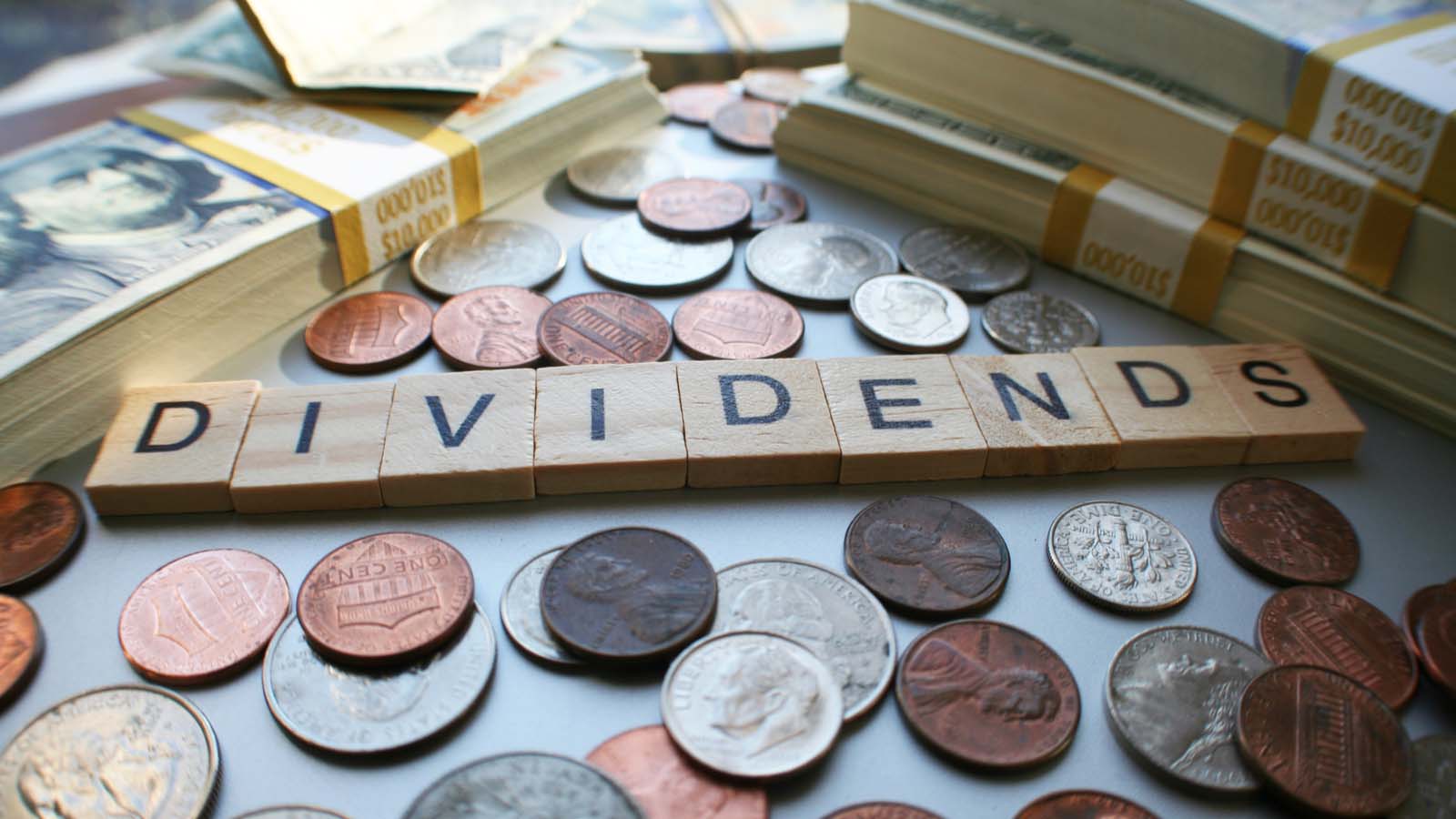 Since Thursday, the price action on Wall Street has been devastating for the bulls. I anticipated a weak Thursday but the follow through has been a bit too harsh. This week we are likely to see some fireworks, so investors are throwing all stocks out. The good and the bad end up in the waste basket, so it’s time to get to shopping. Among the rubble are good quality high dividend stocks, which are gold for income investors. The trick is to do it in tranches and at proper intervals.

The fear are stemming from the hash tightening stance that the U.S. Federal Reserve is taking. This week we will know more, but until then investors price in the worst. For years, the loose monetary conditions pretty much eliminated all forms of it. Investors had no choice but to seek stocks for income. Now the hawkish Fed actions are reversing that process a bit. Eventually, bonds will revert to being a viable alternative to stocks. Until then, it is still viable to seek high-dividend stocks that are stable enough. Premium payouts from banks and bonds are still anemic.

It is important to not chase stocks too closely to prior fail levels. I specifically caution against the runaway freight train oil trade. That’s where the best high-dividend yield stocks lived. During the pandemic correction, I pointed out the foolproof strategy to buy Exxon (NYSE:XOM) and Chevron (NYSE:CVX).

At the time their stock had hit rock bottom, and their yields were at record levels. Currently we have the exact opposite situation, so neither are obvious candidates for a fixed-income strategy. Meanwhile, there are a few stocks that don’t have quite as much risk. Regardless, I warn against taking full positions in anything right now. I would much rather leave dry powder to see where this sentiment crisis is going. 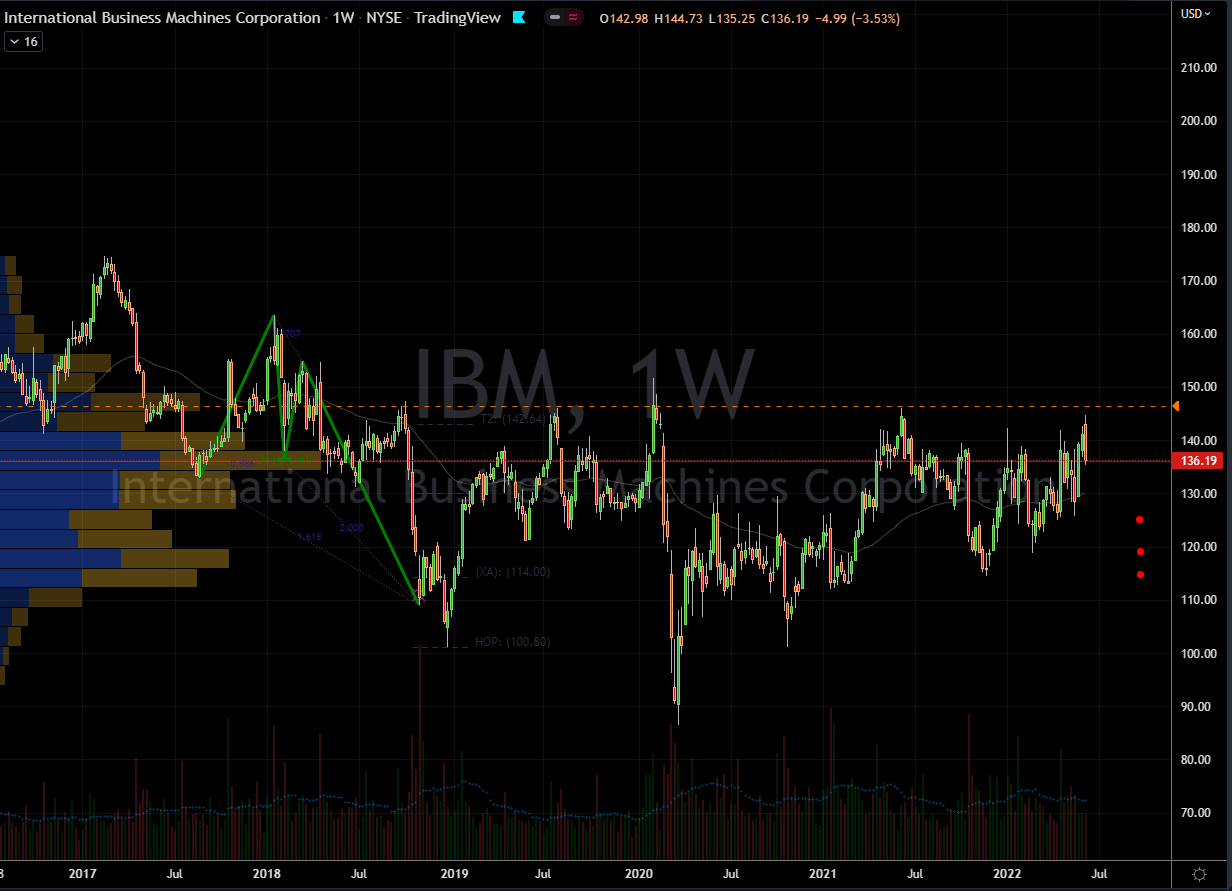 Yes, I surprised myself because this is my least favorite stock of all tech stocks. I was a fan of the tech in the 90’s, but they have resisted the new trends. Instead they focused on obscure targets and the proof was in the pudding. They just about broke records and not in the a good way. Let’s just say management underwhelmed for about a decade. Net income now is about half of that of 2015.

Clearly this is not a good growth story to tell. But that’s OK since today’s focus is on high-dividend stocks, not finding the next Alphabet (NASDAQ:GOOGL,NASDAQ:GOOG). One thing IBM did well is consistently grow its dividend payout 27 times straight..

Of late, and while markets are struggling, IBM stock is showing relative strength. Even though I don’t like its execution, I don’t hate its financials. Even though its revenues and profits are shrinking, they still generate a ton of cash. They are likely to continue paying the dividend, which is a handsome 5%.

Its 22 price-to-earnings ratio is a bit on the expensive side. Luckily, the technicals could offer it support for the next month. There could be red days, but there might be a band of buyers lurking below current levels. If by some miracle the bulls are able to breakout from $147, they could strive for 12% more from there. Meanwhile, the 4.9% high dividend reward is plenty of incentive to be patient. 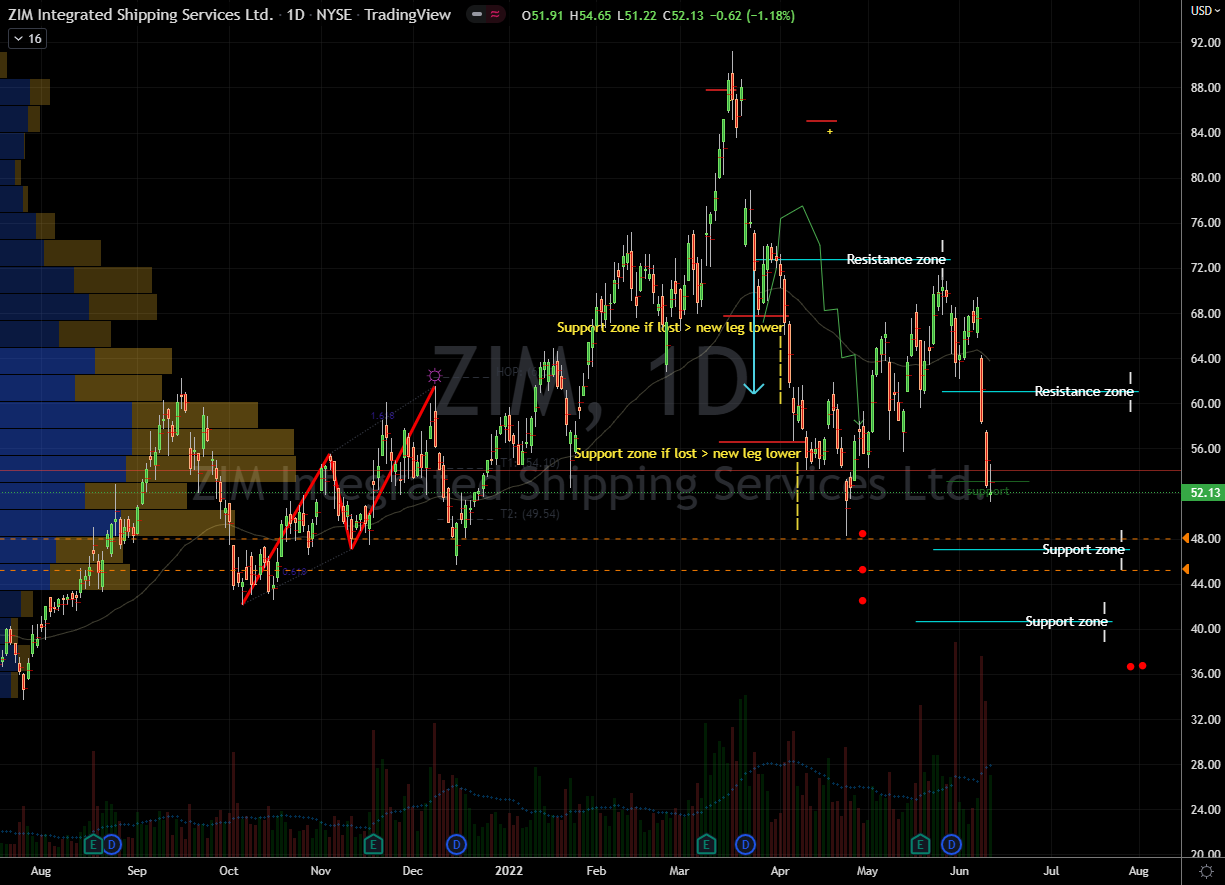 When compiling a list of high-dividend stocks for 2022, we’d be negligent to not mention ZIM Integrated Shipping (NYSE:ZIM). It has paid a ton this year already, including a whopping $17 dividend in March. The most recent one was only $2.85, which is still enormous and larger than last year’s. When the payout is this big, investors go into it at their own risk.

There aren’t too many sure things on Wall Street, so I would consider this one on the risky side. The stock is doing well under current theme investment trends. They can flip on a dime and leave the company hanging. So far the financials are still showing strength. Sustainability is what’s at risk.

After the March special high-dividend payout, ZIM stock lost almost half its value. The rebound was 47% and impressive, but it failed half way and convincingly. The rally didn’t even match the prior resistance zone at $75 per share. This leaves the bulls looking tired and vulnerable. If ZIM loses the support from April, it could trigger a big bearish target.

Luckily it has support below because it will need all of it to hold $40. Yes, it could be in danger of a disaster, but that is not the current likely thesis. It is a scenario that investors looking for high-dividend stocks seekers need to know. 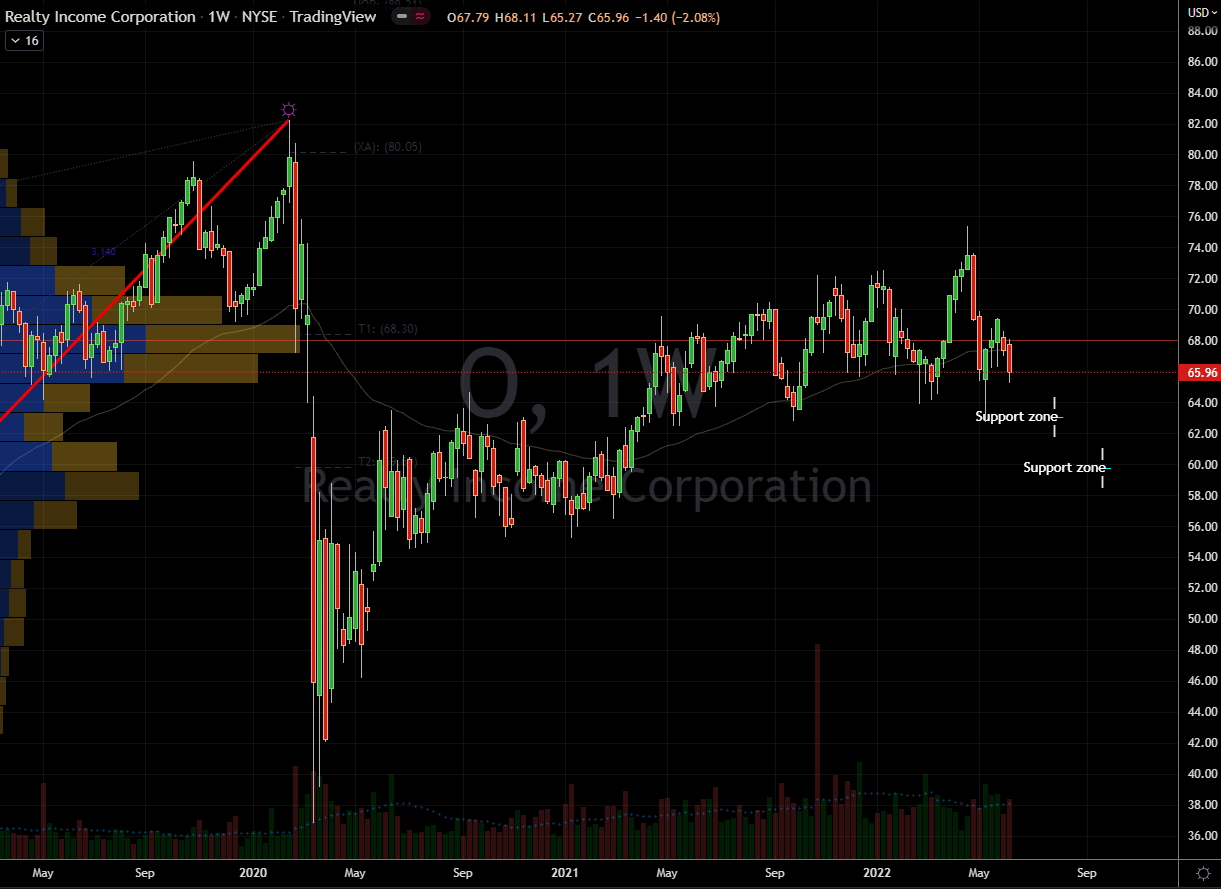 Realty Income (NYSE:O) has commitment to the high-dividend yield in its name. Therefore, it will likely take extremely dire circumstances for it to cut the payout. Currently O stock yields about 4.5%, which is significantly higher than most other conventional fixed income. Moreover, the stock has already given back a lot of its froth. So the risk of capital destruction is relatively low.

O stock has already fallen 12% from its April highs. It also is just above a very heavy consolidation zone below $63 per share. The bulls will likely defend it vigorously, and there are plenty of support lines. The bears failed in their last nine weekly assaults at breaching $62.90. This is in spite of them having a strong tailwinds. The sentiment is at its lows, and fears are at highs.

I do worry about the real estate market during this rate hike campaign. But I bet the company’s large leases to high-profile companies like FedEx (NYSE:FDX) will survive. Besides, its income was steadily rising years before the pandemic. The rate is not very impressive, but my point is that its success is not recent. There are no pandemic advantages that are transient. But the Fed’s threat is real, from a business and stock perspective.

Investors would do well to pace themselves with any of our three high-dividend stocks. We do not know where Wall Street will bottom. And the indices are in free fall into the Fed announcement this week.

Patterns Suggest Royal Caribbean Stock Will Fall Again on Fed News
7 Retirement Stocks to Buy in July
🛢Ditch Dangerous Oil Stocks Before the Recession Hits
This Is When You Can Be Aggressive in Buying AMD Stock
Unemployment Rates: The Highest & Lowest Worldwide